Land disputes in the Kruger Borderlands

Will ecological reserves be the solution to poaching? Estácio Valoi

Will ecological reserves be the solution to poaching?

An area of protection along the Kruger National Park frontier targets poachers. Displaced populations denounce the usurpation of land by wealthy foreigners in partnership with corrupt political leaders. 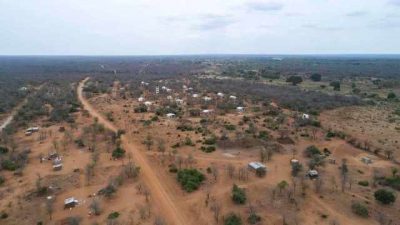 In the district of Massingir, with a coverage of about 580,000 hectares on the Mozambican side, separating across the border line with South Africa, the high rate of poaching is notorious. It is estimated that 90% of the 3960 rhinoceros victims of poaching in Kruger National Park since 2010 have been slaughtered by Mozambican poachers who enter the park across the border, according to tax inspectors

South African tourism companies and conservation agents have been developing eco-tourism projects in Mozambican territory, along the border line with the aim of creating a protection zone against Furtive Hunting along the 360km extension, to protect the rhinos and elephants that have progressively been targeted by hunters.

Communities that have had to give way to the protection zone have accused companies of usurping land to create Ecological Areas for the mega-rich. The inhabitants claim that South Africans are aided by the son of the former President of the Republic of Mozambique and local political leaders through bribes, false promises and deliberately fomented land conflicts.

"They said they would give us jobs when we gave them the land. That was not true. They then manipulated and divided our communities so that only they could reign and take advantage, "said Isac Alione Fubai, a former leader of the Cubo Community.

Twin City, a South African company that occupied large tracts of land in the protection zone, had created conflicts between members of the Cubo and Nkanhine communities for their own benefit, Fubai said.

In South Africa, Twin City's main business is the development, rental and management of shopping centers. The company belongs to the super-rich Pistorius family, world-renowned after the former Paralympic athlete Oscar Pistorius killing his girlfriend, model Reeva Steenkamp in 2013.

In Mozambique, the company formed a consortium called Twin City- Karingana Wa karingana Ecoturismo Limitada, based in Maputo and registered in the Commercial Entities Registry. Its partners are: Twin City Development (Pty) Ltd, holding 50% of the shares and Twins Investment Limited, shareholder of the other 50%. The Mozambican shareholders, represented by Muhammad Khalid Peyrye, are: the former Governor of the Gaza Province, Eugénio Numaio, his son Rangel Numaio and the Mozambican business coordinator, Renato Mucavel.

380/5000 Twin City Development was established in 1984 by Arnold Pistorius, Oscar's uncle, and has consolidated 27 portions of land along the Mozambican border within the 137,000-hectare Karingani Game Reserve. Over time, Mozambican government officials have helped take 20,000 hectares of communal land in favor of Karingani, and plans to acquire more.

First of all, the Cuban communities agreed to give 10,000 hectares to Adolfo Bila, Administrator of the Massingir district during the term of the first President of the Republic of Mozambique, Samora Machel. Then another 10,000 hectares were released to the former Governor of Gaza, Eugénio Numaio, after he spoke at a meeting with the members of the Community Association on the importance of Ecotourism to the community.

"The first 10,000 hectares were passed to Numaio by Bila, and we agreed with this, in the expectation that the former administrator would fulfill his promises of social responsibility in exchange for the land. But he did not live up to his promises. No member of the Cube Community is working for Twin City, "said Fubai.

In addition to jobs, the agreement with the Community Cube consisted of including veterinary facilities and piped water for their livestock. "But in addition to having built two classrooms, a bathroom, a kindergarten and a fence for the hospital, Bila did nothing else," he said.

After the intervention of the Terra Viva Center, a non-governmental organization for land and environment issues, community members agreed to maintain and develop 3,000 hectares of the remaining 10,000 hectares that had originally been occupied.

Members of the community formed an association called Tlharihane va ka Cubo, and agreed to move to Macavene and Xilalane Valley, near the Massingir Dam.

In 2006, the Community Cube Association formed a consortium with the African Wildlife Foundation (AWF) to develop a project and tourist resort on the community's 3,000-acre site. "The AWF suggested that we accept Numaio as our partner and that he would place a fence around the area to prevent lions from killing people and cattle," Fubai said.

The partnership saw Numaio take up 60% of the project and community tourist resort. Disputes surrounding the property arose, over 3,000 hectares and Numaio subsequently announced that it had obtained DUAT, Land Use Right and Use, as its property, justifying this by saying that it had invested in the project.

In May 2016, Balule Lodge was inaugurated by the Minister of Land, Environment and Rural Development, Celso Correia. Samora Machel Junior, son of the first President of the Republic was mentioned, along with Eugénio Numaio and Renato Mucavele as the Mozambican partners. The Inauguration ceremony was marked by the absence of the Cubo Community.

Other conflicts stemmed from promises of fence after two people and hundreds of heads of cattle were attacked and killed by lions crossing the territory of Twin City, from South Africa to Massingir.

"We asked them to put a fence because the lions cross over to this side, killing our cattle and the hippos feed on our crops and destroy our fields. But Numaio refused to put the fence and said he wanted to appropriate our 3,000 hectares of land. We do not want to see our land being stolen from us, "Cubo community leaders said.

A lioness who killed a young man on a farm was killed by members of the community. "We have complained about the wildlife and in 2001, Twin City asked us to put our complaints in writing. We did it but we did not get results.

"Now we know why they always refused to put the fence. Because they want to take the land away from us, "said community members.

Fubai stepped down from his position as leader of the Cubo community, saying he was under pressure from Numaio and the District Government of Massingir to persuade the Community Association to cede its last 3,000 hectares to the Twin City partnership

In October 2010, the development of tourism projects in the community was interrupted by the District Government. Amélia Cubai, who replaced Fubai at the head of Tlharihane Va Ka Cubo, said several officers including the District Administrator of Massingir had tried to persuade the community to hand over their 3,000 hectares of land to Twin City, which would bring substantial development to the community, otherwise they would "take the land by force."

"The community was not intimidated, we declined," Fubai said.

380/5000 The 2017 Census was compromised last year when the Cubo community demanded that the government return their land as a condition for them to participate in the census. As a result, the Minister of Land, Environment and Rural Development Celso Correia undertook to end the 5-year land conflict with Twin City giving the population the right to use other lands.